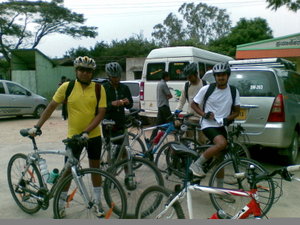 My first century ride! Rode in a group of 5 in an odd combination of hybrids, MTBs and even a single speed. Things went well till we reached the base, got a little difficult the first few kms into the climb and the final few kms even saw me taking a walk on really steep gradients.

Tried to not go too fast downhill as there was a crazy guy on a Honda CBR continuously going up and down, still managed it in about 12-13 mins apart from a break when we had to stop to help one of the guys who had a fall after hitting the side wall.

After reaching the base and on the way back to the highway, a long stretch with a slight downhill lighted up my eyes. Went into sprint mode and reached 56.1 kmph, beating the old max speed of 49.6 kmph easily. Speed really reduced in the final 20 kms as I began to feel the noon sun sapping away my energy. Reached home in the afternoon, tired but accomplished 🙂